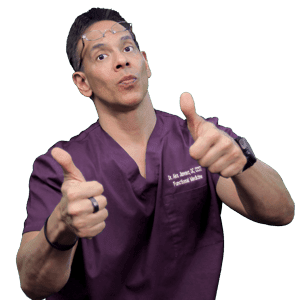 James Hale and his daughter talk about their personal experience with Dr. Alexander Jimenez and how he helped them through sports injuries. For athletes, injuries are quite common. Injuries occur when a misstep, accident, lack of balance, opposite force, or anything of that matter occurs to the body. Often times, injuries can be scary when they occur because you do not know the extent. Many athletes just hear a pop and feel pain. This causes emotional pain for the athletes as well as they do not know how long they will need to sit out of their sport for. After an injury first occurs, the body’s natural way of protecting itself is to become swollen or inflamed. This draws the blood into the area to promote healing. Although it does not look good, inflammation is a good healthy response. Dr. Alexander Jimenez takes athletes in and evaluates the injuries. He orders X-rays to ensure nothing is broken before starting the healing process. One thing Dr. Jimenez believes in is motion. Motion is key and motion is what life revolves around. By getting the injured limb and moving it, stretching it, and adjusting it, the body receives signals to heal quicker. Dr. Alexander Jimenez can treat sport injuries of any kind, ranging from ankles, knees, hips, back, shoulders, arms, hands, and neck. Chiropractic adjustments are not just for treating back and neck issues but all injuries overall. Chiropractic adjustments along with movement have been shown to heal injuries faster. In the experience of James Hale, he brought both of his children to Dr. Alexander Jimenez when they were injured and it significantly improved their symptoms. His oldest son had a hip injury from football while his youngest daughter had an ankle injury. James Hale brings his children to Dr. Alexander Jimenez because he knows that he is a doctor he can trust to fix the pain his children are having. -Kenna Vaughn, Senior Health Coach

[00:00:14] James Hale, I’m a teacher.  I have my three beautiful children,  two older boys and then my baby girl, my two oldest, and one of them has been affected by coming here to see Doctor Jimenez. I had a quarterback just graduate a year and a half ago and then I have a receiver that both graduate from Eldorado High School. And this one’s about to graduate.

[00:00:36] It was during practice we were scrimmaging, our older teams and I went up to block and one of the girls had flown into the net and then I landed on her foot and my ankle just popped. And it was really scary because like injuries like they really scare me. So it’s one of those things that I freaked out and like, I didn’t know what to do the first few days. The first few days really hurt and I couldn’t put pressure on it.

[00:00:59] And like we were kind of just freaking out because we had an important tournament coming up. And I was just kind of like, oh, no. And then we thought about Jimenez and we were like, oh, yeah, they’re great doctors. Like, he knows so much about the body. So we just like automatically came here and they helped me get back to me. For the first few days, I was just really scared to move it around and I just didn’t want to. But as soon as I got here like the first thing I did was move it and put a lot of pressure on it. It was scary, but it didn’t hurt. And he had shown me like, oh, I can.

[00:01:34] And so it kind of helped me get confidence back into, like playing and saying, like, I can move it without hurting it. And he just had like this. Don’t be afraid to move it. He really helped me, like, show that my ankle was not as bad as I thought it was like I don’t know, which has helped a lot with that getting back.

[00:01:51] And you would never think you come to a chiropractor or a thing. You just wouldn’t go to a chiropractor. You think backs and popping the neck. My son’s injury was with the hip and he came in right off the bat, started moving it to promote the healing. I mean, of course, they do all of the back stuff where we do the x rays and stuff so he knows what’s fixable. But right off the bat, he starts moving and letting us know, you know, it’s injured right now and they will recover fast. But, you know, and he did it with her, like she’s saying with her ankle. Keep in mind her ankle was swollen and the first thing he does is pick it up and that’s it, right into movement. And she can say it didn’t hurt but she was crying. But you could see that he knew he was talking about. And right off the bat, he was explaining to us on his whiteboard. You’ll get in there and he’ll show you what is going to do and how he’s going to do it. There hasn’t been anything wrong with me, but two of my babies have come here and they heal faster because of it.

As an extension to dynamic rehabilitation, we too offer our patients, disabled veterans, athletes, young and elder a diverse portfolio of strength equipment, high-performance exercises and advanced agility treatment options. We have teamed up with the cities premier doctors, therapist and trainers in order to provide high-level competitive athletes the options to push themselves to their highest abilities within our facilities.

We've been blessed to use our methods with thousands of El Pasoans over the last 3 decades allowing us to restore our patients' health and fitness while implementing researched non-surgical methods and functional wellness programs.

Our programs are natural and use the body's ability to achieve specific measured goals, rather than introducing harmful chemicals, controversial hormone replacement, un-wanted surgeries, or addictive drugs. We want you to live a functional life that is fulfilled with more energy, positive attitude, better sleep, and less pain. Our goal is to ultimately empower our patients to maintain the healthiest way of living.

With a bit of work, we can achieve optimal health together, no matter the age, ability or disability.

Podcast: Dynamic Heel Regulator Genesis & What it is

Dr. Alex Jimenez Podcast: What Chiropractors Do & Why They Do It

PUSH Fitness Podcast: What Is It & Why Are We Here?

Podcast: What is the Fasting Mimicking Diet?